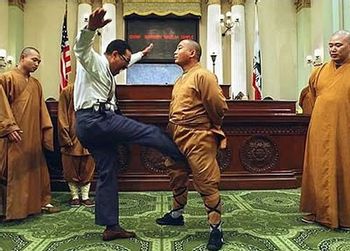 Your Groin Attack is weak, grasshopper.
"Please, this isn't a bar fight. Have some class."
— Alucard to Trevor Belmont, who responds by headbutting him, Castlevania (2017)
Advertisement:

The man's leg kicks towards the hero's groin. It hits him, hard enough to take down a lesser man. But not this hero! This hero has balls of steel and won't crumple even if a truck drives into his groin.

This is a subversion of Groin Attack, which is where a male character gets hit in his genitalia and goes down.

Typical justifications of this trope include the target wearing a codpiece, lacking genitalia where he is being hit (especially common in Speculative Fiction, but can also happen if a man's already been castrated and thus has Disability Immunity), or being female (incidentally, a Groin Attack on a female in real life is nearly as effective and dangerous as it is when used against a man, though it is considered less funny).

To add extra humour, the person doing the attack may actually hurt themselves attempting the Groin Attack (because In Soviet Russia, groin attacks YOU!!). Cue several seconds of cursing and clutching at the affected area—long enough for the attacked to retaliate.

Not to Be Confused with Brass Balls, nor boules of steel.

Not really related to Nerves of Steel, which is less literal than this trope. Subtrope of Super Sex Organs and No-Sell. Overlaps with Kung Fu-Proof Mook if the target of the Groin Attack attempt is, well, a Mook. Funnily enough is Truth in Television with Shaolin Monks claiming that there is a practice for this, complete with video

Also, despite the name, Boobs of Steel is not the Distaff Counterpart of this for breast attacks.