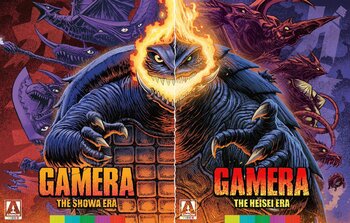 "Gamera is really neat! Gamera is filled with meat! We've been eating Gamera!"
— Joel and the bots provide their translation of the theme song
Advertisement:

In 1965, a black-and-white kaiju movie was made by Daiei in order to cash in on the success of Toho's Godzilla franchise. That would star a legendary Friend to All Children known as Gamera.

Gamera is essentially a giant turtle that flies by spinning around and saves Earth from danger on a regular basis. Unlike most other monsters, he was extremely benevolent toward humans.

It all started with the Showa series. Aside from the first movie, the movies were in color and usually had Gamera fight other monsters. While not as popular as Godzilla, Gamera managed to become a moderate success. The series abruptly stopped in 1971 when Daiei filed for bankruptcy. Apart from Gamera: Super Monster, a 1980 film that was little more than a Clip Show, the Gamera franchise would be dormant for many years.

The legacy of Gamera modestly carried on and particularly in America. After Gamera's first film premiered in U.S. theaters in a somewhat modified form, the first five sequels were shown constantly on local television stations in the '70s and '80s. The aforementioned eighth film Gamera: Super Monster aired on MTV at a time when they rarely showed movies and, was also released to local television. In the late '80s, the seventh film Gamera vs. Zigra had its long overdue release along with differently edited/dubbed versions of four other Gamera films via airings on USA Network and local stations as well as video releases from new distributor Sandy Frank. Gamera was introduced to a new audience when the Sandy Frank versions aired as episodes of the series Mystery Science Theater 3000. On the show, the films were derided for having too many cringe-worthy moments (one infamous scene had Gamera swing up and down a pole, Gymkata style), bad dubbing, and too much emphasis on the kids.

Then, the Heisei series came. After a long wait, it was decided that the Gamera series should be revived. Shusuke Kaneko, who would later become famous for the Death Note movies, was chosen to direct a new Gamera trilogy. What we got was a drastic change from the previous series. The movies became much darker in tone, and the monsters were much more abstract than anything previously seen in a kaiju movie. The trilogy has been acclaimed by critics from both sides of the Pacific.

After the Heisei trilogy ended, it took seven years for a new Gamera movie to come. Gamera The Brave, the fourth and long-thought-to-be final Gamera film of the Heisei era, held no relation to the previous three films, instead going for a full reboot of the franchise. It attempted to be more like the Showa films while still keeping the Heisei trilogy's tone. It tells the story of a younger Gamera named Toto by a young boy called Toru Aizawa, who raises him from a hatchling, having to rise up to face the threat of a frilled lizard monster called Zedus. While reception for this new film was positive, a sequel never materialized and the series once again fell back into hibernation.

produced by Shigenori Takatera of Kamen Rider Kuuga and Daimajin Kanon fame, but restructuring of Kadokawa has led to a delay in the project. However, a 50th Anniversary short film

doubling as a proof-of-concept trailer for a new feature in 2016-2017 was released at New York Comic Con 2015, directed by Katsuhito Ishii, who is also writing the new film.

Films in the Gamera Franchise include:

These are the Japanese titles of the official films. The names vary in regional release.

The Showa series contains examples of:

The Heisei trilogy contains examples of:

And, naturally, all incarnations contain:

Gamera's the latest thing...
He fills our hearts with spring, spring, spring...
Anytime you want some moonbeams... Gamera is the thing.
Feedback

Example of:
Friend to All Children