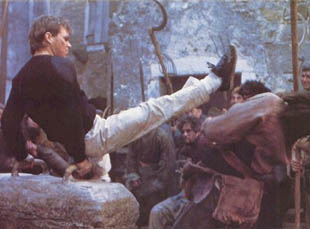 Hu! Ha! Gymkata!
"You are invited to witness the deadliest martial art of them all..."
— Tagline
Advertisement:

Gymkata is a 1985 American-Japanese martial arts action film based on Dan Tyler Moore's 1957 novel The Terrible Game. Shot in Yugoslavia, the film stars Kurt Thomas as Jonathan Cabot, an Olympic-levelnote His one chance at competing in the Olympics were scuttled by the 1980 US boycott gymnast who combines his gymnastic ability with ninjutsu to enter a deadly competition in a fictional country, Parmistan. It has developed a cult following as an unintentional comedy for its dubious premise, poor production quality and low budget.

The United States "Special Intelligence Agency (SIA)" wishes to set up a site in the Hindu Kush mountain range of fictional Parmistan to support a satellite monitoring station, which will aid the US in preventing possible nuclear attacks. Before the US can go forward, however, they must gain permission from the Khan of Parmistan (Buck Kartalian). The Khan will allow the US to build their station only if they assign a designated champion to participate in "The Game". The Game is a deadly athletic competition where the victor earns the right to their life and is granted one wish. Apparently no foreigner has won the game in nine centuries, but the US approaches Olympic gymnast Jonathan Cabot (Kurt Thomas) to be their champion. Cabot is informed that the previous athlete the US sent to participate in The Game went missing in action; not only was this athlete an SIA operative, he was also Cabot's father.

Although Cabot is a world class gymnast, he lacks the survival skills to endure the deadly nature of The Game. He will be pursued by ninja-like Parmistani warriors who will stop at nothing to kill Cabot. In order to have a fighting chance in The Game, Cabot receives invaluable training from an unnamed Japanese martial arts master (Tadashi Yamashita) and Princess Rubali (Tetchie Agbayani), daughter to the Khan of Parmistan. He undergoes a rigorous regimen of weapons training, fighting styles and climbing up and down stairs on his hands. This amalgamation of martial arts and Cabot's gymnastics skills give birth to a new discipline deemed Gymkata. Towards the end of his two-month training period, Cabot makes a romantic advance upon Princess Rubali. She initially resists, but then succumbs to him.

For the general trope of gymnastic moves being used for combat, see She-Fu or Dance Battler.

Gymkata has examples of: