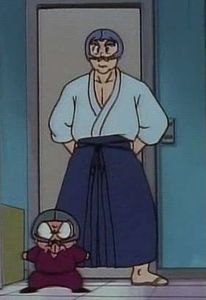 Many anime characters seem to think that in order to sneak anywhere, it is necessary to at least tie a handkerchief (known as a tenugui) around one's head, with one set of adjacent corners tied under one's nose and the other two knotted to make it into something like a skullcap. (It looks like a variation on the handkerchief-headgear of Monty Python's "Gumbies".) Many fans throw around theories like "tying the handkerchief under the nose is supposed to help dampen the sound of breathing".

In fact, it is derived from ancient Japanese romantic practices. Young unmarried women were not to be too friendly with young men, and home visits at night were right out! So the young man would wear a handkerchief in the aforementioned manner. That way, if the lady liked the gentleman, she could honestly say that she did not see his face clearly (and if she did not like him, he could be identified easily). Over time, the classically-tied handkerchief became comic shorthand for "Incompetent Sneaky Person".

Sometimes this is supplemented with a full Ninja suit, but many characters think the handkerchief alone is sufficient. It usually isn't (but that probably doesn't stop it working as a Paper-Thin Disguise). Click here

◊ for an example.

A possible version in the proto-trope stage at the moment may be Solid Snake/John Rambo's long bandana.

For the Western equivalent, see Blatant Burglar. If you're looking for the other kind of Stealth Clothes, try Spy Catsuit.