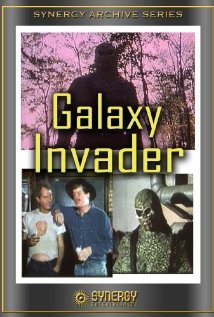 "It came from a galaxy far, far away. An alien explorer. Its mission... TO SURVIVE!"
Advertisement:

The Galaxy Invader is a 1985 Direct to Video Science Fiction film directed by Don Dohler. It concerns an alien crash-landing on Earth and the rednecks that are hunting him.

Partly notable because footage from this movie was used for the credits sequence of Pod People.