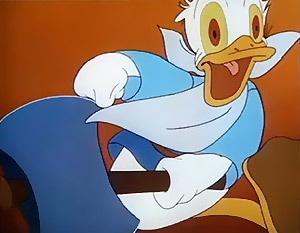 Donald Duck + hunger-induced insanity = Ax-Crazy
"Oh, don't let all the joking around fool ya—I've got kind of a thing for killing. Most funny people do, you know. The two things must be linked somehow."
— Henry, Fire Emblem Awakening
Advertisement:

A fictional character who is insane (in the psychotic, out of touch with reality way) is usually also violent. Thus, in typical TV-land logic, if you become psychotic, you must also become violent—even if you never were before. A character who already resorts to violence will turn on their friends instead of fighting whatever enemy they usually fight. (Conversely, a villain or antihero who engages in unnecessary violence will often be labeled psychotic both in- and out-of-universe, even though that character might be perfectly sane.)

What's more, the fictional psychotic will not only be invariably violent, they'll actually be more lethally effective than a sane person. Count on the villainous psychotic to be a nigh-unstoppable assassin who's mastered Offscreen Teleportation rather than, say, a poor deluded individual uselessly arguing with or attacking their own hallucinations, or getting caught during their very first crime because they weren't trying to escape. Expect plenty of ridiculously heightened abilities, ranging from super-strength to freakish imperviousness to pain.

This is usually used to enhance the frightening aspect of a character since psychosis makes them unpredictable and their behavior unfamiliar. In a fight, they have terrifying Confusion Fu. Many slasher-film villains are insane; most characters perceived as psychotic are also violent and unpredictable. The very connotation of "escaped lunatic" is that of a violent person, an urban-myth trope that goes back as far as the first mental asylums. The same goes for "psycho", "madman", and "insane", all of which commonly imply violence or evil (or both).

Although over one third

of the world's population qualify as mentally ill at some point, media coverage of mental illness

is mainly comprised of extremely negative and derogatory depictions — as you can see on TV Tropes itself. Incompetence, violence, or criminality are generally the forms that appear in fiction, with far less depiction of 'uninteresting' conditions such as depression, catatonia, or 'harmless' OCD. In 1999, characters in prime time television portrayed as having a mental illness were depicted as the most dangerous of all demographic groups, with 60 percent shown to be involved in crime or violence.

Such negative depictions, including in children's cartoons, are thought to contribute to stigma and negative attitudes in the public and in those with mental health problems themselves, although more sensitive or serious cinematic portrayals have increased in prevalence.

This trope has some roots in Truth in Television, though of course different mental illnesses will differently affect a person's propensity towards violent crime: some illnesses have violent behaviour as a symptom, whilst others (such as depression) make a person less likely to commit a crime. Overall, people with mental illnesses do commit slightly more violent crime than average. However, it's not anywhere nearly as common as media would imply. note  Mentally ill people are also more than eleven times more likely

to be victims of violence (although it should be noted that the people in that statistic were seeking help, whereas the ones who were not were most likely not). Alcohol and drug abuse are associated much more strongly with violence, and when you account for the increased prevalence of drug and alcohol abuse among those with mental illnesses, the extra risk of violence for mentally ill people overall vanishes completely... but that's not as interesting.

This is becoming more of a Discredited Trope, thankfully, as more writers are leaning towards interesting motives for violence, but still lingers on in the Horror genre.

See also: Ax-Crazy. Compare it with Sanity Has Advantages. Contrast Loon with a Heart of Gold.

Donald having a hunger-induced breakdown and attempting to kill their cow so he, Mickey, and Goofy can eat.

Donald having a hunger-induced breakdown and attempting to kill their cow so he, Mickey, and Goofy can eat.