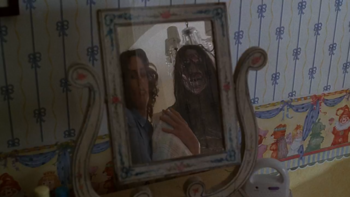 "Mirrors are considered items of enchantment. A broken one... means something."
Written by David Amann
Directed by Cliff Bole
"The raven is a carrion bird attracted to death and decay. What if this entity that you saw is somehow a personification of that? What if this creature was brought forth in order to attack Martha? Then the question becomes, 'who summoned it forth?'"
— Fox Mulder
Advertisement:

Mulder is called away from a stakeout and assigned to investigate a murder in a seemingly perfect town.

"I think she did what she did to protect her family."