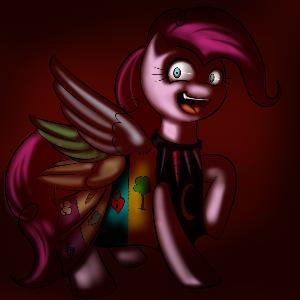 Do you know what her fancy dress is made out of?
"Dash, you've gotta stay still, or I'll keep missing."
— Pinkie Pie
Advertisement:

Cupcakes is a dark and extremely gory Dark Fic of My Little Pony: Friendship Is Magic by Sergeant Sprinkles.

Perhaps what makes this story so disturbing is that, throughout the entire story, Pinkie Pie keeps up her bubbly, cheery personality, cracking jokes and insisting that she and Rainbow Dash are having a party, even as Dash pleads and begs for her life. Not surprisingly, the fic is notorious among the fanbase, to the point where it inspired several pieces of artwork and multiple alternate endings.

. Both the original and grammar-corrected versions can be found there, but you should know what you're getting yourself into, first.

This fic has also caused an ever growing amount of related fanfictions by other authors. Prequels, parodies, and sequels.