Literature / To Kill a Mockingbird 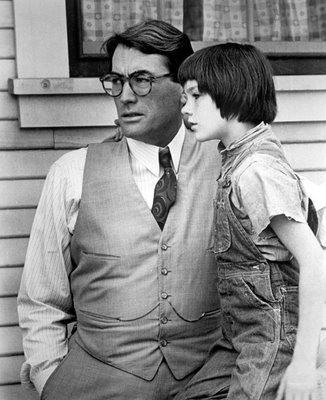 "'...shoot all the bluejays you want, if you can hit 'em, but remember it's a sin to kill a mockingbird.' That was the only time I ever heard Atticus say it was a sin to do something, and I asked Miss Maudie about it. 'Your father's right,' she said. 'Mockingbirds don't do one thing but make music for us to enjoy. They don't eat up people's gardens, don't nest in corncribs, they don't do one thing but sing their hearts out for us. That's why it's a sin to kill a mockingbird.'"
Advertisement:

To Kill a Mockingbird is a Pulitzer Prize-winning 1960 novel by Harper Lee, set in Depression-era Alabama. It revolves around the Finch family, particularly the coming-of-age of one Jean Louise "Scout" Finch and her brother Jem. Intertwined with Scout and Jem's childhood adventures is the story of their father Atticus, a lawyer defending a black man named Tom Robinson who's been falsely accused of raping a white woman.

Despite (or possibly because of) its near-universal acclaim and status as a classic, this was the only book Harper Lee ever published during the 20th century. In 2015, news broke out

that she would publish Go Set a Watchman, a rejected manuscript written before To Kill a Mockingbird set in The '50s and featuring many of the same characters, including an adult Scout and an aging Atticus.note The publication of Go Set a Watchman was controversial, but one thing definitely known is that it isn't the same continuity as To Kill a Mockingbird. For starters, Tom Robinson's fate is completely different.

In 1962, To Kill a Mockingbird was made into a film directed by Robert Mulligan and starring Gregory Peck as Atticus Finch, probably his most well-known role today. For the rest of his life, he gladly named it his favorite of his many roles.

In 2018 Aaron Sorkin adapted the story into a stage play.

Alternative Title(s): To Kill A Mockingbird