The Glasses Come Off 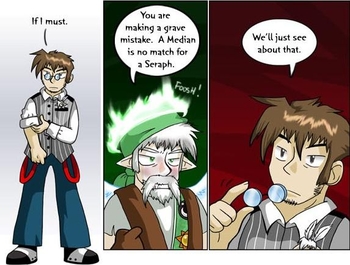 Or not, I guess.
"When you look at Clark Kent when he's working at the Daily Planet, he's a reporter. He doesn't fly through the air in his glasses and his suit."
— Gene Simmons
Advertisement:

A good way to mark your hero as an intellectual is to stick him on the far side of a pair of Nerd Glasses. A good way to mark your character as a badass is to kick some ass. We also all know that guys who wear glasses can never kick asses. It's contractually forbidden. Thus, when an intellectual is about to kick ass, the first thing he has to do is take off his glasses. (See: Male version of Flung Clothing) For an additional humourous/intellectual touch, the characters may be shown taking especial care to put their glasses away in their pocket or in some other safe place, before commencing the violence.

Characters may also take their glasses off before kissing, because some guys don't make passes at girls who wear glasses (see Beautiful All Along and The Glasses Gotta Go). Also because a pair of specs might get in the way. (And TWO pairs certainly will.)

One strange side effect is that if a character does this enough times, they may stop wearing their glasses altogether. Rarely is the fact that the character may have needed the prescription in the first place brought up, it's usually Hand Waved that they eventually got contacts. While the loss usually represents the character taking a step forward in their attitudes, fans who are into that sort of thing can find it frustrating.

Given that such characters will at some point be shown to be Blind Without 'Em, it may seem strange that removing their glasses renders the characters into Action Heroes, rather than rendering them, well, blind, but it seems to work. May occasionally make sense if the hero willingly removes her/his glasses to limit her/his fighting prowess.

There are other, more practical reasons for this trope, of course; it is, after all, not a bad idea to remove your glasses before doing things where they might fly off or get broken, and preventing unwanted reflections from the lenses becomes troublesome during martial arts. And then there's the fact that keeping any easily shattered material near your eyes during a fight is a really bad idea (which is probably where the taboo against hitting a guy with glasses on came from). In the unlikely event that you have Eye Beams, of course, you have even more reason to get the lenses out of the way. And finally, those who have reading glasses don't usually need them for anything else, and so don't accustom to the sensation as easily as those who wear glasses all the time; in this case, it's not removing the glasses for the fight so much as removing the glasses because they're not reading anymore.

Note that it isn't enough just to have glasses, you have to have Nerd Glasses for this trope to apply. (Compare Glasses And Ponytail Cover Up.) Some characters have Scary Shiny Glasses or Cool Shades, and they are most certainly not more powerful when The Glasses Come Off. Except of course, when the glasses are the distinguishing trait for the character, in which case, you should probably back off. Quickly.

When someone takes their glasses off to express surprise, see Glasses Pull. When characters fight while wearing their glasses, it's Specs of Awesome. As the examples show, inversions in which a character becomes more badass when they put their Nerd Glasses on (because now they can actually see clearly to fight) are also common. See Book Snap for another intellectual sign of impending anger.