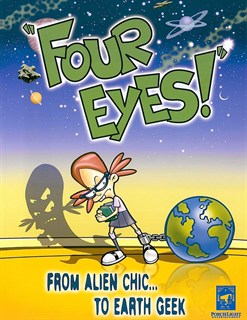 Four Eyes! (known as Quat' Zieux in French) is a 2005 animated series created by Darryl Kluskowski. The show was given an English dub and it is a co-production between Porchlight Entertainment, Inc. Los Angeles, CA and Pictor Media, SA, France.

The series centers around an alien girl called Emma, who is sent to Earth by her parents to repeat the fifth grade. The name of the show is also taken from the fact that the true alien form of the protagonist is literally having four eyes and coincidentally, the glasses she uses in order to morph herself into the shape of a human being is through a pair of glasses and the notorious twin antagonists call her by that name. Thinking of herself as a far superior life form, she has to bare the hard days of her life on Earth and try as hard as she can to assimilate into the masses, lest she is revealed and, well, you know.

. It depends with where you're at, however.