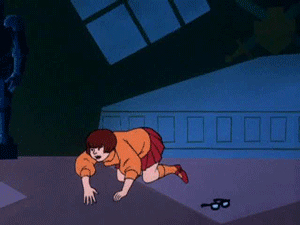 On the bright side, they're not contacts.
Advertisement:

Any character who wears glasses and is Blind Without 'Em — which is to say, almost every character who wears glasses on TV — lives in fear of dropping or losing their spectacles, because invariably some helpful but elephantine bystander might promptly step forward to help look for them — and immediately crush them underfoot. That is to say, the character is afraid this will happen, which is why they're frantically searching. Actually crushing the glasses is not a requirement for this trope.

The sight-impaired character must then often spend at least part of an episode temporarily blind, either because the glasses end up crushed, or because they just couldn't find them.

Sometimes this is done deliberately, with the Jerk Jock or other bully of the week knocking the glasses off and optionally crushing them underfoot in a classic Kick the Dog moment.

Truth in Television: Losing your spectacles can be a severe problem, as anyone who has really bad eyesight will testify. Although it's unlikely for the lens of glasses to be crushed when stepped on: in most cases, the frame will warp and a lens might pop out, but both are easily fixable on the spot. Despite the fact that they are still called GLASSes, these days lenses are made from polymers (typically a form of polycarbonate) that are lighter and less likely to break (although more prone to scratchesnote Which is actually less of a problem than it would seem, as minor, or even moderate, scratches on the surface of the lens itself are extremely far out of focus, and, thus, almost invisible, when the glasses are actually being worn.). Surprisingly, losing the single screw holding a lens in place (which, in real life, is far far harder to find and repair on the spot, mainly because said screw is tiny) is rarely done on TV.

Related to Glasses Curiosity. Not to be confused with A Glass in the Hand. A coincidentally convenient replacement may fall under Universal Eyeglasses.