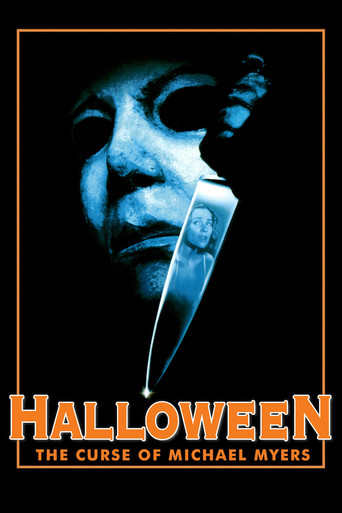 "Kill for him."
"Do you know why we celebrate Halloween?...A long, long time ago, it was night of great power, when the days grew short and the spirits of the dead returned to their homes to warm themselves by the fireside. All across the land, huge bonfires were lit; ohh, there was a marvelous celebration. People danced, and they played games and they dressed up in costumes hoping to ward off the evil spirits, especially...the boogeyman."
— Mrs. Blankenship, explaining Halloween to Danny.
Advertisement:

Halloween: The Curse of Michael Myers opens with a teenaged Jamie escaping with a baby from the clutches of a mysterious group known as the Cult of Thorn (who freed Michael from jail at the end of the previous film). She doesn't get far — thanks to Michael Myers — but she manages to hide her child before Michael finally kills her. Tommy Doyle, one of the kids Laurie Strode babysat in the original film, finds the child — an act that leads Michael back to Haddonfield. As the bodies start to stack up again, Tommy — assisted by a retired Dr. Loomis — tries to unravel the mystery surrounding the cult that seemingly controls Michael and save the child Michael wants to kill...

The film underwent a heavily Troubled Production with heaps of Executive Meddling, and was released to heavy savage from critics and fans. It has since gained infamy due to its two bootlegged (and better-received) alternative versions: the gorier director's cut and the much different producer's cut (which would later see an official release in 2014). This film also marks the end of this version of the Halloween continuity previously set by Halloween 4 and 5; the next Halloween film — Halloween H20: Twenty Years Later — ignores the events of this film (and the previous two films) and creates an alternate continuity that picks up after the events of Halloween II (1981).

Halloween: The Curse of Michael Myers contains examples of the following tropes:

"...If there's one thing I know, you can't control evil. You could lock it up, you could burn it, and bury it, and pray that it dies, but it never will. It just rests for awhile. You could lock your doors and say your prayers, but the evil is out there...waiting. And maybe, just maybe...it's closer than you think."