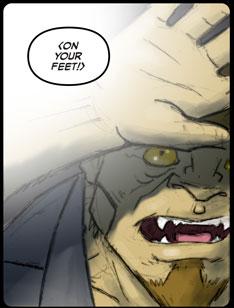 "At first, when any of them is liberated and compelled suddenly to stand up and turn his neck round and walk and look towards the light, he will suffer sharp pains; the glare will distress him, and he will be unable to see the realities of which in his former state he had seen the shadows."
— Plato, The Republic, describing the Platonic Cave
Advertisement:

Any human, or human-like monster, that's used to living in dark conditions will find it physically painful to adjust to the bright light of day — a process that may take weeks. This is usually not a warning of his character, even if Light Is Good.

May produce Blinded by the Light in quite normal lighting when other characters are just fine, but it can also allow good sight that is merely painful. A mundane equivalent to Weakened by the Light. Sunglasses may help during the transition. Often indicated by a character's holding up his hands to shield his eyes.

Truth in Television as anyone whose eyes have been dilated after staying a time in a dark place can testify.

Compare First Time in the Sun. Overlap is frequent, and this trope is frequently strongest then, but for this trope, it does not have to be the first time, and the sun doesn't have to inspire hope.

Note that any situation where the eyes can not adjust (back) to daylight is Weakened by the Light.

Example of:
Blinded by the Sun