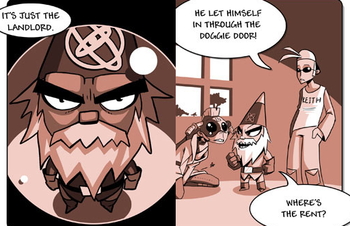 In a series dealing with a character staying in apartment-style housing, a landlord (or building superintendent) is a common sight as a Drop-In Character. The job description entails what one would expect: the upkeep of the building and grounds. Their occupation gives them an excuse to constantly be around despite not being friends with the main character, while their apartment setting can house a slightly more realistic version of Pretty Freeloaders who, naturally, constantly visit the put-upon lead.
Advertisement:

The landlord may be The Friend Nobody Likes to the rest of the cast (especially the ones who are always asking about the late rent payment), or they may be the most responsible one there, serving as the Only Sane Man or a mentor figure, as they are usually older than the main cast. The one constant is that their position as the landlord provides an excuse for them to fit into a larger ensemble cast in a friendly manner, although they might play the role of a minor antagonist sometimes. In real life, in many jurisdictions, landlords have to give advanced notice to tenants before they visit their properties.

This trope is most common in Dom Coms, Roommate Coms, and Slice of Life works.

Compare Cute Sports Club Manager, Sensei-chan, and Nerd Nanny, who fulfil a similar role in the story. Contrast Cranky Landlord, a landlord who is outright antagonistic to the main characters.