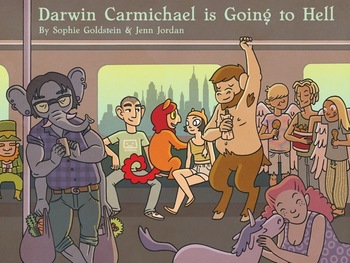 It's tough living in Brooklyn when you've got a crap job, you haven't been on a date in a long time, and you've got so much bad karma that nothing goes right for you. Your pet manticore is always annoying you, and those good-for-nothing angels on your couch do nothing but smoke pot all day. And, oh yeah, you're going to hell.

Darwin Carmichael is Going to Hell

is a webcomic by Sophie Goldstein and Jenn Jordan that ran from 2009 to 2012. Set in a version of Brooklyn where All Myths Are True, the comic chronicles the karmically-challenged Darwin Carmichael in his everyday life and his (generally futile) attempts to avoid damnation.

Darwin himself has to deal with a buildup of negative karma due to making the Dalai Lama "retarded", which is partially responsible for giving him a terrible life and will send him to Hell unless he does something about it. His friends include Ella, an almost-literal Karma Houdini, his landlord Patrick, a Minotaur, his pretentious artist roommate Matt, Matt's Muse girlfriend Melete, and his pet manticore Skittles, with a literal age of 2000 or so and a mental age of twelve. The series has a fairly detailed art style and combines comedy with serious explorations of the characters.

Darwin Carmichael is Going to Hell contains examples of the following: