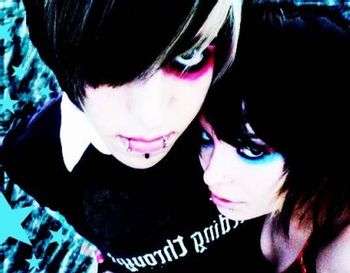 Their life is high-contrast pain.
I stole some pins from the noticeboard and pressed them into my hand and they spelled "why?"
Why did they spell "why?"
Because there weren't enough pins for "oblivion"
—Bill Bailey, "The Song Written from the Perspective of a Young Man Who Works at Starbucks and Self-Harms"
Advertisement:

Teenagers who are whiny, self-important, and generally trying to work their way to self-identification. The character type based off the Emo persona.

The things that differentiate and identify Emo Teens are that they dress in black, listen to strange music (specifically, the "emo" genre, whence the term comes) and generally think that they are erudite (or, at least, surprisingly coherent). The slightly better-kept ones are usually political. If the character is female, she will tend to be extremely self-conscious about her appearance, but implausibly attractive all the same.

Since Emo Teens cultivate an out-of-the-mainstream image, sometimes writers get lazy and use them as a stand-in for any variety of geekishness that isn't considered "too nerdy".

Most shows with an Emo Teen do it semi-sympathetically, where the character is at worst whiny and judgmental, but fundamentally good. However, if any character is going to suffer from an overload of Wangst, it's them.

In Real Life, most definitions of "emo" require that you act like your life sucks when it doesn't to qualify. In fiction, however, There Are No Therapists, and no matter how dark a Back Story a character has, acting even remotely unhappy is sufficient to be labelled "emo". Internet fanboards don't care if you spent the first decade of your life in a cupboard under the stairs only to discover your magical new world comes with a mortal enemy, your dad scarred your face with fire and kicked you out for valuing human life above military victory, or you came home from school one day to find that your big brother killed your parents. Suck it up, emo boy.

In days past, the Emo Teen would have been a Goth or — more rarely — Perky Goth. (Except during The '90s, when they would be wearing grunge flannel.)

Candace reveals her "emo" side.

Candace reveals her "emo" side.