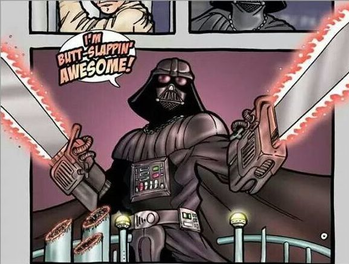 Darth Vader Dual Wielding chainsaw lightsabers. If he got any more awesome, he'd explode.
"Why do the Decepticons always get the good shit?!"
— Robert Epps, Transformers: Dark of the Moon
Advertisement:

There is a reason actors fight for the chance to play the bad guy. The lines are great, the costumes are awesome, the songs are spectacular, their schemes are brilliant, the villains often look much sexier than the heroes, they have their fair share of Cool Planes, Cool Cars and Cool Boats to flaunt, and they don't have to spend the whole shoot pretending they are nicer than anyone they've ever met. No, seriously; it's psychological!

Plus, there are all those wonderful toys!

Plus, there are all those marvelous toys... Wait, we already said that.

Compare Good Is Boring. Contrast This Is Your Brain on Evil, Being Evil Sucks (which deglamorize it), and Hate Sink (villains who deliberately lack any cool/redeeming traits). See also Balance Between Good and Evil. Those wonderful... Ahhh, forget it. The reason Love to Hate exists. Dark Is Not Evil, Noble Demons, and some types of Anti Heroes are able to harness the coolness of evil without the actual evil. Compare the subtrope Damn, It Feels Good to Be a Gangster! when criminals are consciously portrayed as cool by the work itself. Compare Draco in Leather Pants when the coolness of the evil (among other things) makes fans think the baddie should be a good guy. Compare also Fame Through Infamy when being infamous is seen as as cool as being famous.

When Wanda tries convincing Timmy to stop using Dark Laser's powers, Cosmo ruins her point by spelling out the advantages dark powers have over fairy magic.

When Wanda tries convincing Timmy to stop using Dark Laser's powers, Cosmo ruins her point by spelling out the advantages dark powers have over fairy magic.