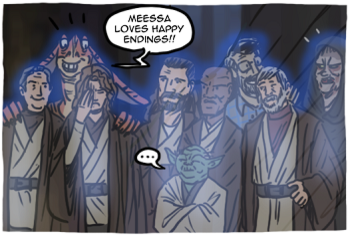 An Ending Trope in which the spirits of the dead reappear at the end of the work. This may be because they were Barred from the Afterlife but the resolution of the plot now allows them to cross over. It could also be because the Unfinished Business the ghosts were worried about has been taken care of. A still-living character who is having a Dying Dream may see the ghosts of characters who have gone before. A villainous character may meet the ghosts of people they killed or otherwise wronged. It may be as simple as a protagonist at the end of a work remembering all those who have been lost.

A form of Back for the Finale. See also Nostalgia Heaven, a closely related trope in which the character dies, often temporarily, and sees the dearly departed in the afterlife.

This is an Ending Trope AND a Death Trope. As such, it contains massive spoilers.