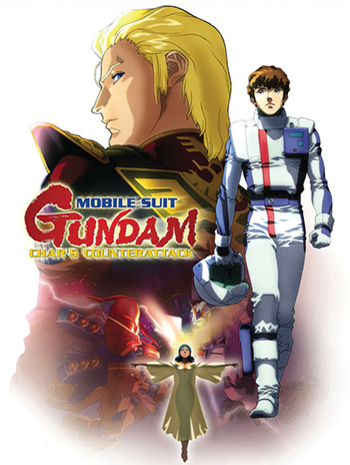 We belong to Earth...
"Amuro. I’m doing something extremely wicked."
— Char Aznable, making the understatement of the Universal Century
Advertisement:

The year is Universal Century 0093: five years have passed since the end of the First Neo-Zeon War. The Earth Federation has recovered and created a new anti-colonial special taskforce to deal with rebel forces: Londo Bell. Elsewhere in space, Char Aznable reappears out of a self-imposed exile with a declaration that he now commands his own Neo-Zeon movement. Unlike movements of the past, Char intends to force the emigration of Earth's inhabitants to space by bringing about an ice age through dropping asteroids onto the planet. Enter Amuro Ray, now a seasoned veteran of the Londo Bell, who will ensure his arch-rival will not succeed.

The movie is noteworthy for having a rather unusual genesis. Originally, director Yoshiyuki Tomino was going to wrap up Amuro and Char's storyline in Gundam ZZ, but mid-way through production he was given the go-ahead to make a movie, forcing the plot of ZZ to be rewritten (details on its trope page). In the meantime Tomino wrote the novel Hi-Streamer, but when Sunrise gave him the green light, he went back and wrote a second novel, Beltorchika's Children, which he specifically wrote to be adapted into a movie. However, Sunrise instead chose to use Hi-Streamer, with the final film being a pretty straightforward adaptation of its second half. These two novels serve as the origin of the Hi-Nu Gundam (the finalized, "perfect" Nu Gundam) and Nightingale (a bigger, beefier Sazabi), which pop up in video games like Super Robot Wars, SD Gundam G Generation, and Gundam Vs Series.

You still don't know the true meaning of Gundam