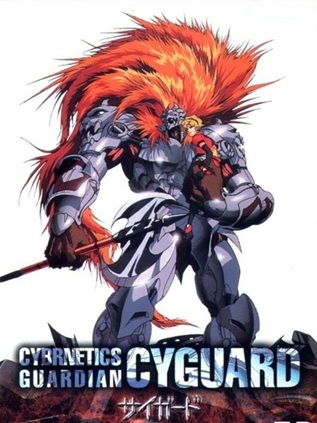 Cybernetics Guardian (often shortened to Cyguard) is a 1989 one-shot cyberpunk OVA, directed by Koichi Ohata, who is known for also directing MD Geist and Genocyber and animated by AIC (who also animated Genocyber). Parts of its soundtrack was produced by the Japanese metal band Trash Gang.

The story involves John Stalker: a research pilot for the Central Guard Company. A series of unfortunate events result in Stalker becoming a pawn of a cult known as the Brethren of Doldo to bringing about the end of the world.

As if he's not already having a crappy time, Adler, a rival of Stalker, hopes to not only murder John but destroy Cancer: a violence plagued slum and the birthplace of John Stalker.

With only an amazingly powerful set of armor imposed upon him by the Brethren of Doldo, John not only has to stop their plans but deal with the machinations of Adler too.

While mostly a Mecha OVA set in a futuristic city. It also has noticeable influences from classic horror films - mainly Frankenstein and King Kong.

It was dubbed into English by Central Park Media, and released under their US Manga Corps label in 1996.