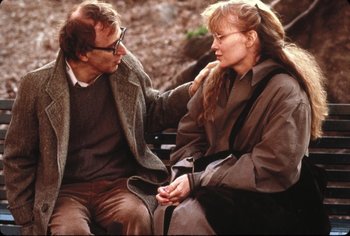 "God is a luxury I can't afford."
— Judah Rosenthal
Advertisement:

Crimes and Misdemeanors is a 1989 Dramedy written by, directed by, and starring Woody Allen. It's one of his most critically-acclaimed works.

The film follows two stories: the "A" story (the Crime) is about Judah Rosenthal (Martin Landau), a successful ophthalmologist and active philanthropist, struggling to break free of a mistress who wants him to leave his family for her. The "B" story (the Misdemeanor) is about Cliff Stern (Allen), a documentary filmmaker who finds popular culture and materialism repellent. Rosenthal is forced to make a fateful decision by his insistent mistress Dolores (Anjelica Huston), while Stern, hopeful to complete his masterwork, agrees to profile his brother-in-law Lester (Alan Alda), a wealthy and successful television producer Stern considers shallow and crass, and finds himself falling for Lester's assistant Halley (Mia Farrow).

Tropes appearing in Crimes and Misdemeanors include: