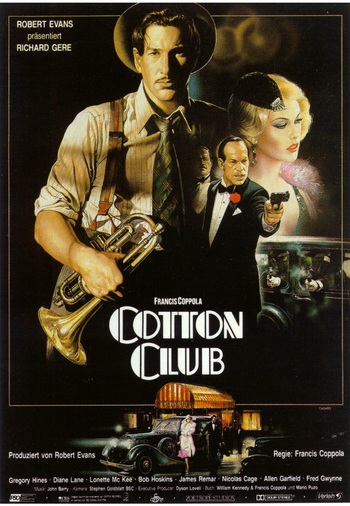 The film is centered on a Harlem jazz club of the 1930s, the Cotton Club. Musician Dixie Dwyer (Gere) begins working in the club, run by mobster Owney Madden (Hoskins), to advance his career, but falls in love with Vera Cicero (Lane), the girlfriend of violent kingpin Dutch Schultz (Remar). In the meantime, Dixie's ambitious younger brother Vincent (Cage) becomes a gangster in Schultz's mob and eventually a public enemy.

At the 2017 Telluride Film Festival, Francis Ford Coppola revealed The Cotton Club Encore, a Re-Cut version that incorporates scenes from Coppola's original cut which he discovered in a Betamax. Digitally restored and longer than the previous version, Encore is stated to be Coppola's true version of his film.