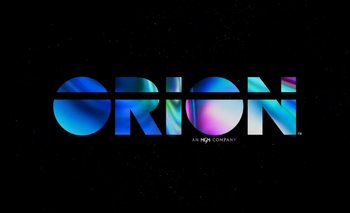 A studio from the stars!
"Take that, Orion. [punch, then Orion's fanfare] That's right, all you are is a failed production company."
—Mayor West

(in a Hilarious in Hindsight moment), Family Guy
Advertisement:

Orion Pictures was founded in 1978 by Arthur B. Krim, Eric Pleskow, and Robert S. Benjamin, three United Artists expatriates who found themselves dissatisfied over decisions made by that studio's then-owner Transamerica. They chose to finance independently-produced films and release them via a distribution deal with Warner Bros. The studio was known for allowing its filmmakers a lot of control over its projects; unfortunately, such business ideals did not equal profits.

The upstart studio wasted no time in acquiring talent and film deals, and got its first film out by April of the next year. However, the movies released in its first two years yielded no major successes outside of 10. However, Orion managed to save some face by hiring back Woody Allen.

In 1981, Orion severed ties with WB, who kept most of the fruits of the deal (such as Arthur (1981), one of Orion's biggest hits up to that point), and got its hands on ailing film studio Filmways, gaining the company's extensive film library, including the near-entire American International Pictures library, as well as many television shows including Petticoat Junction, Green Acres, and the Merrill Heatter game shows (including The Hollywood Squares and High Rollers which Orion produced syndicated revivals of in the mid-'80s; the rights to the former show are now owned by CBS). By 1983, Orion had not only a full distribution arm and ambitious dreams, but also its own television unit and an arthouse subsidiary known as Orion Classics. They even briefly operated a video game publishing division near the end of their lifespan— emphasis on briefly, as they only published two games, Blue Heat: The Case of the Cover Girl Murders and Sonic's Schoolhouse (yes, really).

In September of 1984, Orion released Amadeus, the success of which inspired that of numerous other films later on in the decade, putting the studio into the league of success. This inspired Metromedia to take a stake in the company in 1986, then buying it all in 1988. By 1987, they had also established their own video label, after having gone through other firms (e.g. Warner Home Video, HBO Video and its predecessors, Embassy Home Entertainment, and Vestron Video) for home video releases, while internationally their releases were distributed by Columbia Pictures.

Unfortunately, the end of the 80's heralded a number of costly bombs, most notably "Weird Al" Yankovic's Non-Actor Vehicle UHF, which Orion thought would be a great idea to release in a blockbuster-heavy summer season; audiences weren't particularly interested in seeing the lighthearted comedy movie starring the "Eat It" guy when it was competing against Batman. 1989 was an irreparably huge blow to the studio's wallets, and despite the successes of such films as Dances with Wolves and The Silence of the Lambs (which won back-to-back Academy Awards for Best Picture) at the start of the next decade, Orion was losing money. With cash running low, it had no choice but to declare bankruptcy at the end of 1991. Studios like New Line Cinema, ABC, and Republic Pictures were interested in buying the floundering studio, but nothing came of it (ABC instead bought what remained of their TV division).

While the company finally got out of bankruptcy by 1996, the damage had been done. Only a select few Orion releases came out afterwards, as Metromedia instead chose to focus on the newly acquired Samuel Goldwyn Company. The final nail in Orion's coffin came in 1997, when Metromedia's filmed entertainment properties were bought out by Metro-Goldwyn-Mayer. While sister studio The Samuel Goldwyn Company got to stay around for a few more years before being replaced by Samuel Goldwyn Films independently of MGM, Orion's second chance wouldn't come until 2013. Its first show as a television production unit was Paternity Court, a syndicated courtroom show that's become a decent ratings success, at least enough to justify not only its continued existence, but also led MGM to revive the brand in 2014 as a specialty and genre film division, returning to the movie theater with Child's Play (2019). In 2020, the brand was shifted to serve as a label for historically underrepresented filmmakersnote i.e. women, people of color, the LGBT community, and people with disabilities. It also exists as a copyright name under which to organize its films, as well as those of certain other companies whose libraries MGM has bought out over the years, such as Hemdale and most of the Polygram Filmed Entertainment library (this was in part a tactic by MGM to avoid a distribution deal they had with Warner Bros. for home video at the time; they'd instead distribute their newly-acquired library titles through Orion's still-extant home video arm. WB saw through this and began litigation; ultimately both parties broke their deal early, which enabled MGM to merge Orion Home Video into MGM Home Entertainment).

Despite its turbulent history and becoming a target of mockery among film enthusiasts and popular culture because of it, Orion Pictures was one of the first successful "mini-majors" to break out in Hollywood, proving that it didn't need the backing of a major film studio to make films with high production values, even if said films ended up failing and hurting them financially. Many films produced and/or released by Orion have achieved a lasting impact, through cult followings, pop culture references in other media and numerous honors and accolades. In addition to the aforementioned Oscar wins its films achieved, Orion's portfolio received a total of at least 54 Oscar nominations during its lifetime, a number that other mini-majors during that period (such as Carolco Pictures and The Cannon Group) could only dream of. Their focus on filmmaker-driven-and-controlled fare ended up serving as an influence on other mini-major studios, such as DreamWorks, Lionsgate and Miramax Films, for years to come.