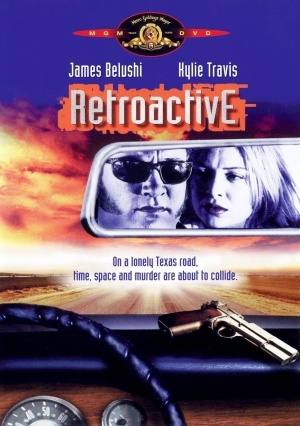 Retroactive is a 1997 sci-fi action film.

Karen is a Chicago cop who travels back to her native Texas after a hostage situation gone wrong tarnishes her reputation. Her car breaks down when she's picked up Frank (James Belushi) and his wife Rayanne. When Frank finds out his wife's infidelity, he murders her in front of Karen before chasing her down. She ends up seeking refuge in a government science lab manned by a guy named Brian (Frank Whaley), but is transported back through time after she accidentally steps into Brian's experimental Time Machine, winding up back in Frank's car 20 minutes earlier. She tries to stop Frank from killing his wife again, only to end up making things worse, necessitating further loops.