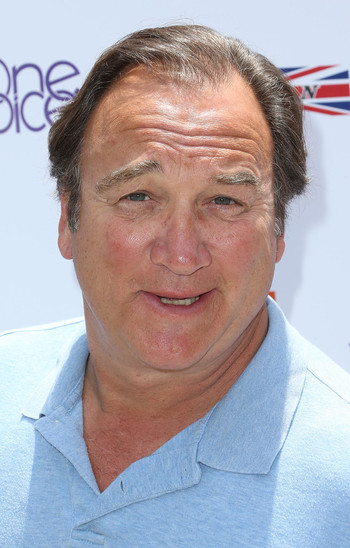 "I don't know if there is a gene for comedy, but my dad was a very funny man. He just didn't know it. He was a naturally funny character, and when my brother and I would laugh at things he said and did, he would say, 'What do you think is so funny?'"
Advertisement:

James Adam "Jim" Belushi (born June 15, 1954) is an American actor, comedian and musician of Albanian descent. He is best known for his title role of James "Jim" Orenthal on the American sitcom According to Jim.

The younger brother of the late John Belushi, Jim was also a cast member on Saturday Night Live during Dick Ebersol's turn as executive producer and showrunner (from 1983 to 1985, though Jim Belushi was temporarily fired due to not being funny enough). His recurring characters included Hank Rippy, the host of a call-in show called Hello, Trudy, Jesse Donnelly (an unlucky man, often mugged and robbed on the streets of New York City), and That White Guy (a middle-aged white man who can rap). Some of his celebrity impressions included Babe Ruth (whom his older brother also played on SNL), Hulk Hogan, Robert Keeshan (Captain Kangaroo), Arnold Schwarzenegger, Pope John Paul II, and Willie Nelson. He is sometimes referred to by John’s fans as “The Funniest Living Belushi”.

Some of his most notable roles include: