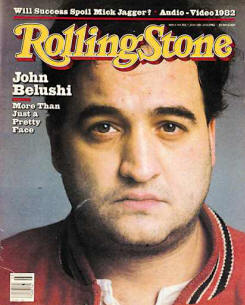 "Some comedians love their characters. I don't fall in love with mine. In fact, I get tired of them very fast. You have to be willing to throw it all away."
Advertisement:

Affectionately known as "America's Guest", John Adam Belushi (January 24, 1949 — March 5, 1982) was a Chicago-born actor and comedian of Albanian descent. He rose to fame in 1971, after joining the Second City comedy troupe, where he became well known for his impersonations of Joe Cocker, resulting in his being cast in National Lampoon's Lemmings, a parody of Woodstock. It was while he was with the National Lampoon that John would meet fellow future Saturday Night Live regulars such as Chevy Chase, Gilda Radner, Bill Murray, and Brian Doyle-Murray. His high school sweetheart Judith Jacklin, whom he later married, also worked for National Lampoon — and, as a fun fact, can be seen dancing with him in Animal House, which he starred in.

In 1975, John Belushi was accepted into Saturday Night Live, alongside Dan Aykroyd, Chevy Chase, Gilda Radner, Jane Curtin, Laraine Newman, and Garrett Morris. (In fact, Belushi was the first Not Ready For Prime-Time Player to appear in the show, as part of the first episode's first sketch.) From here, he went on to work with Dan Aykroyd on a film based off their already highly successful musical act and band, The Blues Brothers, which gained cult status, and a gross revenue of $115,229,890. John and Dan worked together in two other movies, 1941, and Neighbors.

Belushi is hailed as a benevolent figure, often lending a helping hand to any who needed it. This ranged from aiding his little brother, James Belushi, in getting started in comedy, through to helping friends setting up businesses, and delivering an epiphany speech to Tim Kazurinsky (a cast member during Dick Ebersol's era who often felt frustrated and underused about being on the show due to the Spotlight-Stealing Squad that was Eddie Murphy and Joe Piscopo) and assisting him in getting help when the stress of working at Saturday Night Live became too much. He is also credited with choosing music for The Blues Brothers because he thought the original artists could do with the royalties.

Unfortunately, he didn't survive the lifestyle of the entertainment industry. Belushi was very into drugs during his career, and it was very severe to the point that it kept negatively impacting his career and his life. Tim Matheson, who co-starred with Belushi in Animal House, stated that he believed that Belushi actually got introduced to drugs as a result of being exposed to the music industry, which was very drug-heavy at the time, on a regular basis due to frequently dealing with music while performing on Saturday Night Live. Belushi eventually passed away on March 5 1982, following the administration of a cocaine-heroin mix known as a "speedball" (making that famous SNL short film about John Belushi being the last cast member to die and visiting the graves of his former cast members a much sadder watch.). Former singer Cathy Smith later came forward, and was charged with involuntary manslaughter.

Belushi's legacy lives on, however — for better and worse. He has since been awarded a star on the Hollywood Walk of Fame. Aykroyd also affectionately refers to Slimer in Ghostbusters (1984) as, "the ghost of John Belushi". note This is particularly poignant since Dan had written the role of Peter Venkman with John in mind. Chris Farley, another SNL cast member known for being a Big Fun party animal whose life was cut short due to drug abuse, was a fan of Belushi and a lot of similarities can be drawn between the two. Further, John's work still draws audiences and provides an influence to young and upcoming comedy talent such as Danny McBride. After the dramatic political and medical crisis’s of 2020 in the United States, John’s little brother wondered on Twitter what John would think of modern times.

Some of the films he appeared in includes:

My advice to you is to start troping heavily: