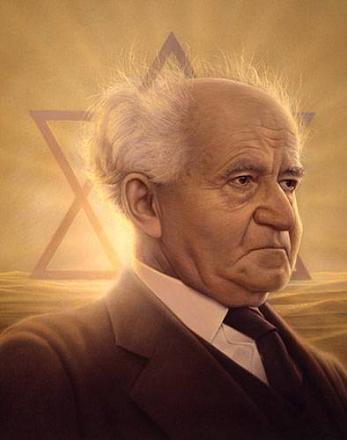 "In Israel, in order to be a realist you must believe in miracles."
Advertisement:

He was born in Poland in 1886. In response to the anti-Semitism he fled to Palestine and became a Determined Homesteader. During the feuding with local Arabs he was a Vigilante Man in the Hashomer militia, an embryo version of the Hagganah which was in turn later to become Israelis with Infrared Missiles. He served in the British army in World War I and then came back to take part in local politics, in which he rose rapidly.

During the Mid-century he directed the policy of the pre-independence Yishuv (a labor union alliance that was evolving into a de facto state), and that of the new state of Israel. He led during World War II and during the War of Independence and helped build a nation that survives to this day.

Ben Gurion was in some ways an Insufferable Genius but he was in the right place at the right time. His personality was more like The Spock than The McCoy, and he led policy through his brilliant grasp of strategy, a gift which Israel badly needed in its formative years.

Nerds who don't keep up with Middle Eastern history or politics may recognize him as the visual inspiration for the Guardians of the Universe...or Section 9 Chief Aramaki Daisuke.