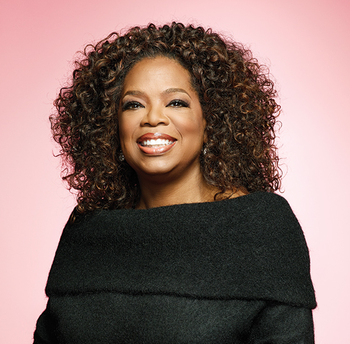 “When you undervalue what you do, the world will undervalue who you are.”
"In my career, what I've always tried my best to do, whether on television or through film, is to say something about how men and women really behave. To say how we experience shame, how we love and how we rage, how we fail, how we retreat, persevere and how we overcome. I've interviewed and portrayed people who've withstood some of the ugliest things life can throw at you, but the one quality all of them seem to share is an ability to maintain hope for a brighter morning, even during our darkest nights. So I want all the girls watching here, now, to know that a new day is on the horizon! And when that new day finally dawns, it will be because of a lot of magnificent women, many of whom are right here in this room tonight, and some pretty phenomenal men, fighting hard to make sure that they become the leaders who take us to the time when nobody ever has to say "Me too" again."
Advertisement:

Oprah Gail Winfrey (born Orpah Gail Winfreynote She was named after Orpah, a Biblical character from the Book of Ruth. It was the one written on her birth certificate, but people kept mispelling it until it stuck; January 29, 1954) is a highly influential American journalist, talk show host, actress, and mogul. Being one of the most respected and admired media figures in the entire world, she has used her various platforms to spotlight black American people, women of all races, LGBT people, victims of sexual abuse, among others. Her talk show, The Oprah Winfrey Show is the Trope Codifier for daytime talk-TV.

Despite growing up living poverty as well as surviving child molestation, she was able to secure a scholarship to college and win a beauty pageant, which attracted local news media. She began her career as a journalist and eventually ending up in Chicago in 1983, hosting their morning talk show, which was low-rated until she joined the team. Within months of her joining the crew, viewership grew and eventually overtook The Phil Donahue Show as the most watched show in Chicago. From there, Roger Ebert persuaded her to accept an offer from King World for a syndicated talk show.

The rest, as they say, is history. From there, her talk show became a huge hit and launched her career from TV journalist to media mogul. She acted in several films, started her own production company (Harpo Productions, named after her first name spelled backwards) and eventually, launched her own television network, the Oprah Winfrey Network (OWN), a joint venture with Discovery Inc.