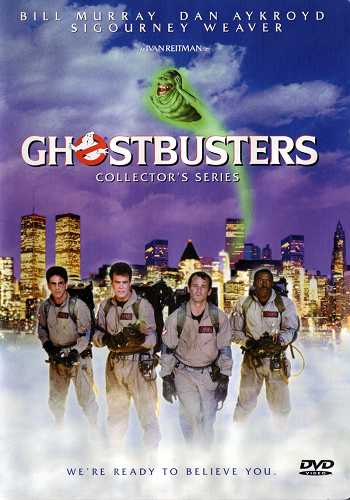 Who You Gonna Call?
Dr. Ray Stantz: Are you troubled by strange noises in the middle of the night?
Dr. Egon Spengler: Do you experience feelings of dread in your basement or attic?
Dr. Peter Venkman: Have you or your family ever seen a spook, spectre or ghost?
Ray: If the answer is "yes," then don't wait another minute. Pick up the phone and call the professionals...
All three: GHOSTBUSTERS! [555-2368]
Ray: Our courteous and efficient staff is on call 24 hours a day to serve all your supernatural elimination needs.
All Three: WE'RE READY TO BELIEVE YOU!
— The 3 founding Ghostbusters in their first TV ad.
Advertisement:

Mad Science takes on occult terror and wins hilariously in the greatest Lovecraftian comedy of The '80s, directed by Ivan Reitman. It went on to spawn a popular franchise.

One of the defining elements of the movies (and the rest of the franchise as a whole) is that the characters examine the paranormal with the scientific method and combat it with technology, rather than other similar stories where the characters have to combat the supernatural with magic or more arbitrary urban legends. Dan Aykroyd and Harold Ramis were responsible for the premise and original script, Aykroyd himself being an avid believer in the paranormal while Ramis admitted to being more of a skeptic. As such, in addition to the excellent comedy and memorable characters, Ghostbusters has been found to appeal to skeptics.

Three parapsychology professors — earnest, forthright, and curious Dr. Raymond Stantz (Akyroyd), sarcastic schemer Dr. Peter Venkman (Bill Murray), and detached academic Dr. Egon Spengler (Ramis) — have finally succeeded in discovering proof that ghosts exist! Unfortunately, they also discover that they have been fired from their positions at Columbia University in New York City. Facing dire prospects in finding new collegiate employment, Venkman has a brainstorm: go professional as paranormal investigators and exterminators. In their last investigation, they devised a technological method of actually capturing and containing ghosts. They set up Ghostbusters, a company providing scientific exorcisms. At first business is slow, with cellist Dana Barrett (Sigourney Weaver) — who becomes Peter's Love Interest — as their sole client. As they begin researching her case, the number of ghosts in New York City increases exponentially.

The Ghostbusters soon become household names and become so busy that they recruit a fourth team member, Naïve Newcomer and token black guy Winston Zeddemore (Ernie Hudson), but they realize that the surge in ghosts is portentous. Dana is abducted and possessed by a malevolent entity in her apartment while her neighbor, nerdy accountant Louis Tully (Rick Moranis), is chased out to Central Park where another evil creature possesses him. Petty bureaucrat Walter Peck (William Atherton) shuts down the Ghostbusters' containment unit, releasing all the ghosts they had trapped and inadvertently allowing the possessed Dana and Louis to meet and unleash Armageddon in the form of Gozer, an ancient Sumerian deity. While waiting for a meeting with the mayor, Ray and Egon explain the phenomena are centered on Dana's apartment, the building around which was designed by a cult from the early 20th century to attract spirits and bring about The End of the World as We Know It.

The mayor decides to let the Ghostbusters try. Worst case scenario is they're wrong and nothing bad happens. Best case scenario is they're right and he becomes a hero for trusting them. The Ghostbusters climb to Dana's penthouse, take on Gozer in the form of a hundred-foot tall marshmallow man, and win by breaking their own most serious safety rule.

A sequel starring most of the original cast was released five years later. For more on the sequel, see the Ghostbusters II page.

A third movie had been stuck in Development Hell for more than a decade. Aykroyd was gung-ho about the prospect and told anyone who'd listen that he had a script all ready to go; on the other hand, Murray was decidedly more skeptical after the Executive Meddling on the second film. Ghostbusters: The Video Game (2009) was touted in some circles as a spiritual sequel, with so many returning cast members, being set in the same continuity as the movies, having been written by Aykroyd and Ramis, and being described by Aykroyd as basically being the third movie. The prospect of a third movie with all of the original leads evaporated completely with Ramis's sudden death in 2014.

In 2014, plans for a Continuity Reboot were announced, directed by Paul Feig. For more details, see the Ghostbusters (2016) page. As publicity for the 2016 version, the first film was re-released in theaters with a "behind the scene" sneak peek of the new film. In January 2019, a sequel to the second film, Ghostbusters: Afterlife, was formally announced, released in 2021.

WHO YOU GONNA CALL?

There is No Dana, Only Zuul

Dana is possessed by a demon named Zuul and tries to proposition Peter Venkman.

There is No Dana, Only Zuul

Dana is possessed by a demon named Zuul and tries to proposition Peter Venkman.