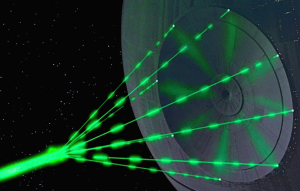 Fire at will, Commander!
Advertisement:

Usually, the resulting stream goes in the logical direction—that is, in the direction produced by taking the average of the directions of the intersecting beams (although more advanced versions are able to swivel in any direction).

Besides Rule of Cool, this kind of weapon has loose grounding in reality. If multiple lasers are fired at the same point so that they intersect there, they simply pass through one another and continue on their respective trajectories. You can try this at home with some laser pointers.

The inversion of this trope, where one attack splits into many, is Recursive Ammo or Spread Shot.

Compare All Your Powers Combined, Roboteching, Wave-Motion Gun. Not to be confused with Crossing The Streams.