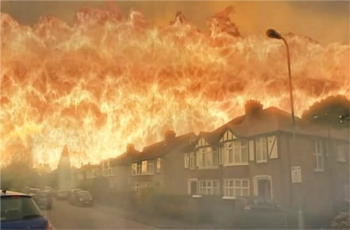 Will you light the sky on fire?
"You might as well have worn a T-shirt saying 'clone'... Although, maybe not in front of Captain Jack."
— The Doctor
Advertisement:

The one where the Doctor has an in-joke with himself and Martha has a clone with a bald spot.

So the world's choking to death with Sontaran cloning gas spewing out of every car on the planet. UNIT gives the Doctor a gas mask (and ignores him when he quips "Are you my mummy?"). He hangs out with obvious-clone-Martha for a bit, because even though she's working for the Sontarans she happens to be doing exactly what he wants her to do: stop UNIT from launching a nuclear attack.

Rose very, very briefly shows up on a UNIT screen, screaming at the Doctor. He doesn't notice.

Luckily, the Doctor can whip up something that can burn all the gas, cleansing the air, using technology that has conveniently been developed by Rattigan's geniuses for when they were going to move to a new planet. He also, once again, decides to sacrifice himself, but Rattigan takes his place and, in a Heroic Sacrifice, blows up the whole Sontaran fleet with a Sontar-HA!

As the Doctor and Donna prepare to see Martha off, the TARDIS abruptly takes off of her own volition, to an unknown destination...