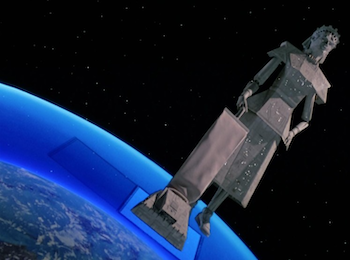 The discerning overlord works smarter, not harder. When the need arises to kill everyone, why tear a world into its constituent particles? Everyone on the planet is equally in its atmosphere: that fragile, wispy shell that can be blown away like seeds from a dandelion, or reconstituted in a number of creative ways. This takes a fraction of the time and effort, and need not deplete precious stores of Applied Phlebotinum at all, yet in skilled hands produces all the spectacle and excitement of antimatter bombs.

Certainly, paranoid bunkers and deep-sea habitats might survive. But then, what about the astronauts? Efforts at complete annihilation must, by their nature, include extra steps to be thorough.

Abusive atmosphere alteration is not solely for the Omnicidal Maniac, either. An Alien Invasion might combine conquest and colonization into one elegant package. Even the good guys may find themselves performing one, once a seemingly empty planet's catacombs open, sleepers waken, etc. The Apocalypse How score of such an act varies, though it's hard for one to not have one.

May overlap with Hostile Terraforming.