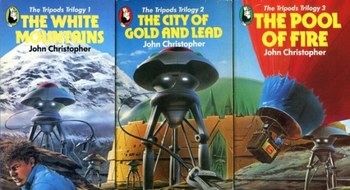 The Tripods refers to a young adult trilogy-and-a-prequel series of Science Fiction novels written by British author John Christopher. This series of novels tells the story of the conquest and eventual liberation of Earth by alien invaders inspired by the Martians of The War of the Worlds.
Advertisement:

The novels are as follows:

In The White Mountains, the Tripods have ruled the world for a hundred years, mankind having been reduced to a medieval state, and kept docile by "caps" which the Tripods surgically attach to their skulls around their fourteenth birthday. Will, an English boy, suspicious of the Tripods, and wanting to escape the mind-controlling Caps, flees with his cousin, Henry, to the eponyomous White Mountains, in Switzerland. En route, whilst in France, they meet up with Jean-Paul, known to them as Beanpole, an intelligent boy who fears that being Capped will stifle his curiosity, and who joins them on their quest for freedom.

In The City of Gold and Lead, Will and Fritz, a boy from the White Mountains resistance, compete in "the games", an Olympic competition the winners of whom are selected to serve in the domed, environmentally controlled cities of the "masters" who operate the Tripods. Having been selected, they infiltrate the Tripods' European headquarters, located in Germany, and learn valuable information about the masters' biology, and their long-term plan to terraform Earth to their standards (and eradicate humanity in the process).

In The Pool of Fire, The White Mountains resistance embarks on a race against time to free the world from the Tripods, in the few years left to them before the terraforming ship arrives.

When The Tripods Came tells the story, introduced in a flashback in the second novel, of how the Tripods invaded and enslaved the world in the 1980s, using television and the mass media to win popular support for themselves and to instigate war between the human governments.

The Tripods was also adapted into a live action television series, produced jointly by The BBC and the Australian Seven Network. Two seasons, covering the first two books, were broadcast in 1984 and 1985 respectively. A script for the third season was written, but never filmed (Michael Grade of Doctor Who cancellation fame also cancelled this). A theatrical film is now in pre-production, although it seems to be stuck squarely in Development Hell. It was also serialized in comic form for the magazine Boy's Life in the 1980s.

The Tripods provide examples of: