Literature / The True Meaning of Smekday 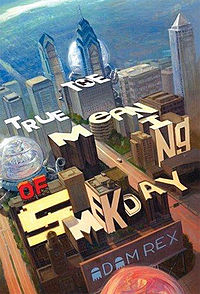 The True Meaning of Smekday is a humorous Young Adult Science Fiction story written by Adam Rex and published by Hyperion/Disney. It all starts with a school essay. When twelve-year-old Gratuity ("Tip") Tucci is assigned to write five pages on "The True Meaning of Smekday" for the National Time Capsule contest, she's not sure where to begin. When her mom started telling everyone about the messages aliens were sending through a mole on the back of her neck? Maybe on Christmas Eve, when huge, bizarre spaceships descended on the Earth and the aliens - called Boov - abducted her mother? Or when the Boov declared Earth a colony, renamed it "Smekland" (in honor of glorious Captain Smek), and forced all Americans to relocate to Florida via rocketpod?

In any case, Gratuity's story is much, much bigger than the assignment. It involves her unlikely friendship with a renegade Boov mechanic named J.Lo.; a futile journey south to find Gratuity's mother at the Happy Mouse Kingdom; a cross-country road trip in a hovercar called Slushious; and an outrageous plan to save the Earth from yet another alien invasion. Fully illustrated with "photos", drawings, newspaper clippings, and comics sequences, this books breathes new life into the "Kid Hero" genre.

The book was loosely adapted into a movie by DreamWorks, titled Home (2015), and was released in March 2015, starring Rihanna, Jim Parsons, and the actual J-Lo.