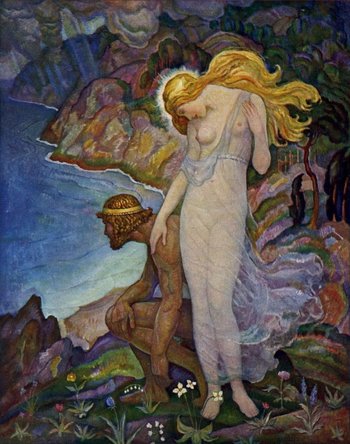 "Look, lady, you're pretty and all, but I really need to get back home."
Odysseus: Stay, Achilles. You were born for this war.
Achilles: A week ago you were right. But things are less simple today.
Odysseus: Yes. Women have a way of complicating things.
— Troy
Advertisement:

Being a hero isn't easy, but sometimes it is soul-crushingly hard. For their own particular circumstances, The Hero has been put through the wringer and may even wish out loud for a chance to leave The Hero's Journey behind, or at least get a chance to rest. Well, they get the chance.

The Hero presented with a "Leave Your Quest" Test will be given the chance to lay down their Sword of Plot Advancement and leave the fight. The form this test takes varies quite a bit, but there are a few common variants. A Knight Errant may enter Ghibli Hills and after getting rid of the local crime boss, gets offered a chance to make a home there by the Determined Homesteader. A wise old mentor can invite the hero to become his apprentice and achieve spiritual enlightenment instead of swinging his sword at monsters. Sometimes just making a Love Interest is enough to seriously tempt a hero to abandon their journey; if not, a forthcoming baby may raise the question of whether a new parent can endanger himself like this. Less benign opportunities come in the form of the Bad Samaritan offering the above, with a slice of Lotus-Eater Machine pie and a glass of The Final Temptation. Similar to We Can Rule Together, the Big Bad might offer the hero a clean slate and promises of non-reprisal if they abandon their quest against them. The trustworthiness of these promises varies, of course.

Being the hero, he or she will refuse the temptation. Reasons include never being safe until the quest is done because It's Not You, It's My Enemies, knowing they would get restless and wander again, or seeing through The Vamp or Big Bad's ruse. The Big Bad can even inspire them with new hope: such an offer would not have been made to someone not a serious threat. Sometimes the hero may not even be tempted if they find the person who invites them to stay unappealing or even outright repulsive (this is often the case with Abhorrent Admirers), and the person in question may even resort to force and coercion.

However, sometimes heroes do give in. In these cases, they usually get a vision warning them to leave, see an injustice and realize they can't stand idly by, they see the pile of cannibalized heroes in the cellar, or their new home gets razed. On the other hand, in a Deconstruction, it may turn out that leaving the quest was actually the better option. For example, a work with a pacifist message can imply that the hero would have been better off living a peaceful life with his Love Interest or becoming an enlightened hermit rather than enlisting in the army to fight a "patriotic" war in a God knows what part of the world.

It's worth noting that a hero legitimately at the end of their quest may feel tempted to keep on "Heroing", and be dissuaded in favor of letting someone else pick up the banner so they can enjoy a Happily Ever After. Or he can keep on with the adventures, which may even be deemed a failure of his part, because he would have done more good in a more mundane but less In Harm's Way life.

See also The Final Temptation, when this is part of a Lotus-Eater Machine used to trap a hero (in which case it could also overlap with Prefers the Illusion), and Cuckoo Nest. This test can come from the villain offering a Last Chance to Quit. For when this occurs at the beginning of a quest, see Red Pill, Blue Pill. In a video game, may lead to a Non Standard Game Over if intentionally included, Sidetracked by the Gold Saucer otherwise. Can be a Secret Test of Character. Contrast Cuckoo Nest, if the hero is tempted to leave their quest by being tricked into believing they were never on a quest to begin with.