Film / The Last Temptation of Christ 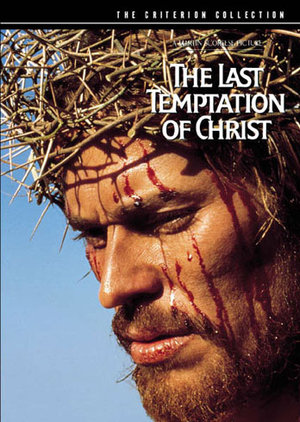 What Monty Python's Life of Brian was to comedy, The Last Temptation of Christ was to drama.

This is the 1988 film directed by Martin Scorsese, with a screenplay by Paul Schrader, adapted from the 1955 novel of the same name by Nikos Kazantzakis. Starring Willem Dafoe as Jesus, what follows is a loose reinterpretation of the Biblical story of Jesus' life and Crucifixion (sorry, at 2 hours and 43 minutes the film's already long enough without him coming back).

As stated earlier, the film/novel depart substantially from The Four Gospels' account of Jesus' life. First to come to mind is that Jesus, while still capable of miracle working, is a fallen and deeply flawed human being, who disrespects his mother, watches prostitutes have sex, and wants to be abandoned by God. Secondly, Judas isn't that bad of a guy. Instead of outright betraying Jesus, he's practically forced into it by the man himself. Because of these deviations, the film ends up using many tropes of Jesus movies while Playing With them in new and rather un-Christian ways.

Released at a time when conservative Christians in America were eager to re-assert themselves as a cultural force after the embarrassing televangelist scandals of The '80s, the film became a huge flashpoint, probably the single most controversial film ever released by a major studio. Protesters picketed theaters, and several theater chains refused to carry it. Beyond the religious controversy, it was also hotly debated by critics, who disagreed on whether Scorsese made a misstep by taking on such an atypical project and whether his modernistic approach to a Biblical tale helped make it more relevant. As the controversy has subsided, it's gained positive re-evaluation as one of Scorsese's most daring films. Thomas R. Lindlof's book Hollywood Under Siege gives a full account of the making of the film, and the uproar it caused when it was released.

Other people appearing in the film include Harvey Keitel as Judas, Barbara Hershey as Mary Magdalene, Harry Dean Stanton as Paul of Tarsus, and David Bowie as Pontius Pilate. The film also featured a score by Peter Gabriel, who later released Passion, a collection of songs composed for and inspired by the film, in 1989; the soundtrack album was the debut release for his vanity label Real World Records. A supplementary compilation of the album's source material, i.e. traditional music recordings (some recorded on-set when the film was shot), Passion: Sources, soon followed.