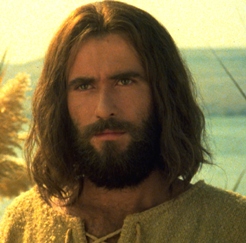 Jesus, also known as The Jesus Film, is a 1979 film dramatization of the life of Jesus as found in The Bible. It stars Brian Deacon as Jesus.

Unlike previous Jesus films like The Greatest Story Ever Told, King of Kings and Jesus of Nazareth which take an Adaptation Distillation or Adaptation Expansion approach to all The Four Gospels, the film is based on the Gospel of Luke. The events, structure, dialogue and narration are taken virtually word-for-word from Luke using the Good News Bible translation, also known as Today's English Version.

the most-watched and most-translated

film of all time, due largely to its global translation and distribution by Christian missionaries. Indeed, it was intended as a Christian missionary tool from the start. But because missionaries usually show the film to people free of charge, accurate figures for total viewings are pretty much impossible to come by, so don't expect to see the film on "Most Watched Films" lists alongside Gone with the Wind and Avatar any time soon.