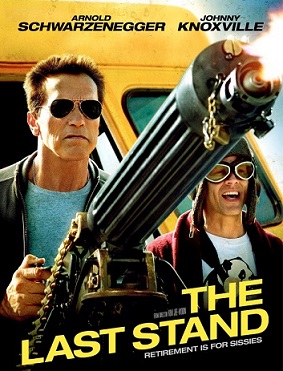 The Last Stand is a 2013 action film centering around Gabriel Cortez (Eduardo Noriega), a third generation cartel leader, who makes a spectacular escape from an FBI prisoner convoy.

Cortez is hurtling toward the Mexican border at 200 mph in a specially outfitted car, a Chevrolet Corvette C6 ZR1, with a hostage and a fierce army of gang members. The only thing in his path is a small town and its sheriff, a former LAPD officer named Ray Owens (Arnold Schwarzenegger), and a couple of his deputies.

This film marks Arnold Schwarzenegger's first leading role since Terminator 3: Rise of the Machines in 2003, and him working with famed director, Kim Ji-woon. Despite this, the film barely made over its budget at the box office leading to questions about Schwarzenegger's box office drawing power in his post-political and post-divorce career.