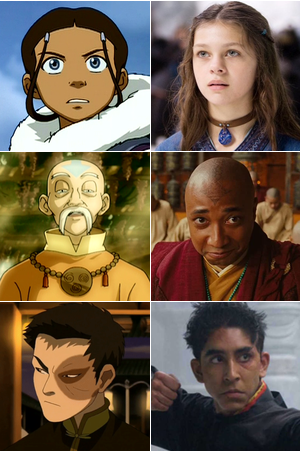 A Race Lift is what occurs when a character's race or ethnicity is changed in the creation of a derivative work, also known as Racebending, and in the case of non-white characters becoming white, whitewashing. Sometimes this is a method to try and keep things politically correct. People can't argue racism if you have a Token Minority in the cast, but you usually run into problems when you change a character who is originally a proud minority into a member of the majority group.

For the sake of some organization the examples have been divided up according to the nature of the change:

If a character in a work changes their race within the storyline, it's Black Like Me (if it's voluntary) or Color Me Black (if it's involuntary).

See Blackface, Yellowface or Brownface when the actor uses makeup to perform as a character of a different race. Whiteface certainly occurs, but is rarely seen as racist.

This has also been known to result from Ability over Appearance, when the character's race is changed because the ideal actor fits the role in everything but their looks.