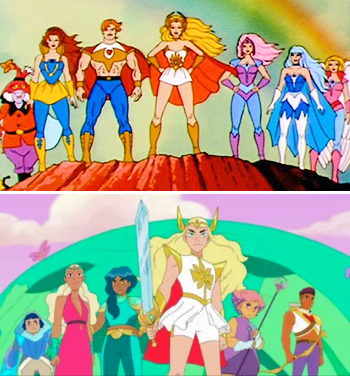 An adaptation or Continuity Reboot tweaks the cast so that the cast represents more groups. How this trope works largely depends on where and when it's set. Diversifying the cast can mean numerous things, from adding a more multiracial cast to having more explicitly queer characters.

A lot of the time this trope is invoked to make a work more realistic. Percentages differ from place to place but a fair percentage of people are of a minority or marginalized group, such as sexuality, religion, or ethnicity, so it's expected that at least a few would likely be sprinkled about the cast. The original work may have been restricted by standards of the time, such as casting white actors for characters of color (usually in racist makeup) or only being able to vaguely imply LGBT characters and only confirm them with author statements, while the newer renditions lack such restrictions.

Other times it's due to a Setting Update. The demographic of areas change with time and social norms change. The newer versions of the work modernize it to fit with the times. In the case of a Foreign Remake, casts may be diversified to fit the different country's setting.

A work must have at least 2-3 unrelated changes. If they don't, they go underneath their respective sub-trope instead.

May overlap with Adaptational Gender Identity, Adaptational Nationality, Adaptational Sexuality, Disabled in the Adaptation, Adaptational Curves, and Race Lift. Compare More Diverse Sequel for when it's the sequel, not the adaptation, that is more diverse. Related to Legacy Character. This is also a common reason behind everyone is gay in fan-works, and for Watched It for the Representation.