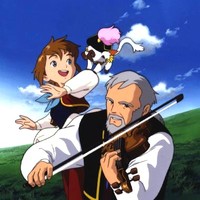 A 1996-1997 anime based on the French novel Sans Famille by Hector Malot, Ie Naki Ko Remi (commonly translated as Nobody's Girl Remi, though a fansub group calls it Homeless Girl Remy) is the last anime that the World Masterpiece Theater made before their ten year hiatus. It is the second anime based on Malot's novel, the first one being the 1977 version made by TMS Entertainment, Madhouse, and Osamu Dezaki. Unlike that version, however, this version is a very very loose adaptation, undergoing many changes to both the story, character designs, character genders, and the overall plot as a result of lack of funding and as a desperate measure to save the WMT from going under. It failed miserably.

Remi is a normal young girl living in the village of Chavanon with her mother and sister. One day, her father comes home and is unusually cruel to the family. Remi learns that she was found in Paris as a baby and isn't their real daughter. Disoriented from being injured on the job, Remi's adoptive father tries to sell her to a slave trader, but she is saved by a traveling vagabond named Vitalis, accompanied by his three dogs: Capi, Dolce, and Zerbino, and his pet monkey, Joli-Couer. Remi can't go back to her mother due to these circumstances, so she decides to join Vitalis's troupe as a performer. But they travel around a lot, and the job of a traveling performer is harsh, and when tragedy strikes, things don't go peachy keen for Remi. But she'll keep on going. She kind of has to, considering all that happens to her.

When the show first aired, fans of the novel were NOT pleased with the changes the show made, and attacked it en masse. Ratings plummeted drastically, complaints were the order of the day, and the overall reception was so bad that the producers couldn't air the final three episodes and they went straight to DVD instead. It didn't help that even before all of this, the WMT and Fuji TV were waging some kind of war against each other back in the late eighties, and people were beginning to lose interest in stories like this. Thankfully, thanks to some international exposure and the internet, it has been gotten better reception from more appreciative fans who like to see it as its own entity and praise the things it did right instead of nitpick at the fact that it's drastically different from the source material.

Not to be confused with Nobody's Girl, the novel by Malot that led to another WMT entry: The Story of Perrine.