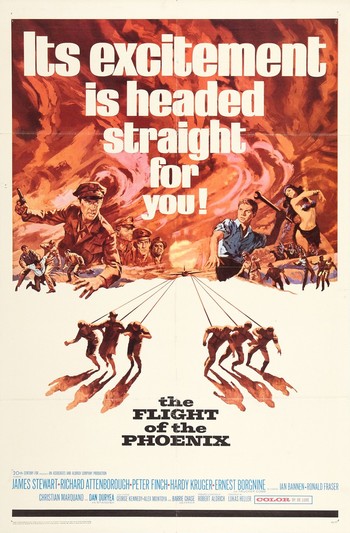 "I told you there would be no difficulty in building this aeroplane. I also told you it would require an outstanding pilot to fly it. The only thing outstanding about you, Mr. Towns, is your stupidity."
— Heinrich Dorfmann
Advertisement:

The Flight of the Phoenix is a 1965 survival drama film directed by Robert Aldrich, adapted from the 1964 novel of the same name by Elleston Trevor.

The plane is caught in a sandstorm and is forced to make a crash landing in the Sahara desert, killing two passengers and severely injuring a third. Though initially optimistic that they will soon be rescued, the survivors soon realise that even if they are missed, no-one knows where to look for them. While Harris decides to set out for the nearest oasis a hundred miles away on foot, Dorfmann announces that he is an aircraft designer and that he has established that they have all the parts to build a smaller airplane out of the wreckage of their aircraft. At first, Towns is dismissive of Dorfmann's idea, but Lew persuades him that the work involved will keep the survivors occupied and give them hope of returning to civilisation. The construction proceeds smoothly apart from the increasing friction between Dorfmann and Towns, until, with the new aircraft nearly complete (and dubbed the Phoenix by Standish), Dorfmann stuns Towns and Lew with a revelation about his professional background.

Though it received lukewarm reviews and was not a box office success, the film garnered Academy Award nominations for Best Supporting Actor (Ian Bannen) and Film Editing (Michael Luciano).

Another film adaptation was released in 2004.