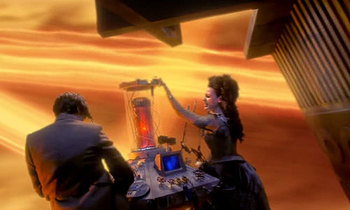 On the plus side, this probably isn't that much more dangerous than piloting his regular Type 40
Heinrich Dorfmann: Gentlemen, I have been examining this aeroplane.
Frank Towns: Yeah?
Heinrich Dorfmann: Yes. We've everything we need here to build a new one and fly it out. Now, if you'd like to have a look at my calculations, I don't know whether you can read my handwriting.
— The Flight of the Phoenix (1965)
Advertisement:

Freedom: seven letters that can start an avalanche of impassioned speeches and any number of revolutions. Also, something that characters and players are frequently deprived of in fiction. A frequent plot element used in stories is to trap the characters in an inescapable location. Well, mostly inescapable. The only means of escape is a damaged car, plane, ship, space ship, Time Machine, or weirder vehicle. In order to escape this Closed Circle they have to repair the vehicle, which won't be easy (otherwise, what would they do for the rest of the episode?). Usually this will require a chain of Fetch Quests for tools, parts, fuel, and potentially crewmembers.

If the vessel is large enough, they may well be trapped inside it and adrift at sea / space / Hyper Space / the time stream, often with the further inconvenience of dwindling supplies and leaks. For extra fun, there are enemies inside and outside the vehicle intent on killing them, and wherever it is they're trapped is about to get attacked and/or destroyed, so there's a time limit on escape as well.

Named after the film The Great Escape, where Allied POWs plan to escape their prison. See also Resurrect the Wreck.