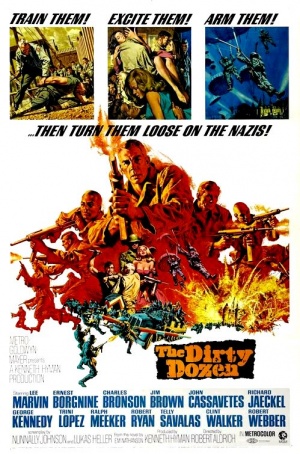 The original Suicide Squad movie.
"I reckon the folks'd be a sight happier if I died like a soldier. Can't say I would."
— Samson Posey
Advertisement:

Before the Basterds, and before the Expendables, there were the Dozen.

Set in March 1944, the film follows the tale of Major John Reisman (Marvin), a rebel in a uniform. He is assigned by his superiors to take twelve enlisted men convicted of capital offenses, and train them for an important mission. Their mission — whether they choose to accept it or not — is to parachute behind enemy lines and infiltrate a French mountain retreat for senior Wehrmacht officers on the eve of D-Day. There, they will kill those present, even if it costs them their own lives to do so.

Three sequels were made in the '80s. Director David Ayer (Fury) has signed on to direct a remake.