All Germans Are Nazis 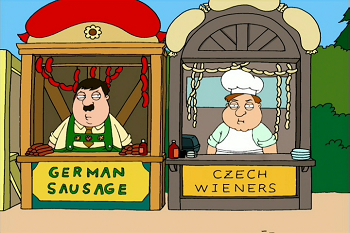 He's already invaded the Polish sausage stand.
"So many people forget that the first country the Nazis invaded was their own."
— Dr. Abraham Erskine, Captain America: The First Avenger
Advertisement:

What happens when Those Wacky Nazis is too good a stereotype to be confined to period settings. Even though World War II is long past, the ugly shadow of Nazism endures, and inevitably colors perceptions of the German people. So, in many post-1945 settings (and Fantasy Counterpart Cultures), German characters will display gratuitous Nazi traits like goose-stepping or greeting their leader with a Roman salute, sometimes when they otherwise have nothing to do with Nazi Germany. Note that much of this is actually banned in Real Life modern Germany.

Can even apply in WWII-based works — a significant minority within the army's officer corps opposed Hitler throughout the war, with planned putsches in 1938 and 39, as well as the infamous 20th July 1944, while also playing a role in various resistance cells (it has been estimated that over 50% of the resistance was military). Given that the Army had had quite a difficult relationship with Hitler pre-1938, a lot of people going into 'inner exile' (seeking a place in society reasonably free from any interaction with Nazi ideology) had also wound up in the service. The record in the war was quite checkered, however, due to an overlap in what was acceptable and desirable for conservative German nationalists (like most of the officer corps) and the Nazis, especially as it pertained to actions against partisans (which the old establishment hated with a passion), scorched earth tactics in the East, and discipline within the Wehrmacht (20,000+ German servicemen were executed during the war).

The Luftwaffe, having been newly created under the Nazis and led by Göring, was the most National Socialist arm in the armed forces, with Luftwaffe personnel being notorious for their sympathies for National Socialism. The Navy, on the other hand never really approved of National Socialism note leading to the famous remark by Hitler of Germany having a 'National Socialist airforce, an Imperial army, and a communist navy' and the Army's intelligence service (the Abwehr) was quite deliberately obstructive to the Schutzstaffel's (SS's) intelligence service (the Sicherheitsdienst or SD) not just out of Interservice Rivalry but also because it didn't approve of all the genocides. Even some civilians spoke out against the Nazis, though all of them were in concentration camps by the mid-1930s. The first people sent to them were not Jews, but all political opponents of the Nazis, starting with the Communists.

Even if the Just Following Orders excuse might not excuse people of the violence they committed whilst working for the Nazis, that does not mean that those people were Nazis and agreed with their entire political agenda. The costs of opposing or even just refusing to support them were very high, not just because you could be killed on the spot (in 1944-45), but also because you could be imprisoned or fired or passed-over for promotion (1933-45). One must also remember the handful of heroic figures like Oskar Schindler

(whose career was famously depicted in Schindler's List), Gert Fröbe

(better known for his post-war acting career in movies like Goldfinger and Chitty Chitty Bang Bang), and Karl Plagge,

who all belonged to the Nazi Party and publicly supported it while secretly working against it. There is also the bizarre case of John Rabe

and the Nanjing Nazis under his leadership, who saved tens of thousands of Chinese people during the Nanjing Massacre in the name of Hitler and the Nazi Party. Rabe had no authority from Hitler to do this. He was acting on his own initiative, from his correct belief that this was expected of a decent person, and his incorrect belief that Hitler was the decent sort of person who would expect this (he later found out how wrong his view had been after being punished for "collaborating with the Chinese" over it).

Finally, one should note also the saying that "not all Germans were Nazis, but most Nazis were Germans"

: the Schutzstaffel (SS) recruited and conscripted many non-Germans to serve on and behind the front lines, respectively (only the volunteers were trusted with weapons). While not even 300k non-Germans fought for Nazi Germany as combat-troops (versus 4m or so Germans), several hundreds of thousands did things like wash horses and drive wagons and carry sacks about for them.

Also, the more stereotypically German characters are (even around other Germans), the more likely they are to be Nazis. Especially beware if they start speaking Gratuitous German.

It is especially prevalent in Eastern Europe, since the last time German soldiers did pay the place a visit, they tried to kill off a quarter of them (under the Hungerplan) as the prelude to replacing them all with Germans (Generalplan Ost

and various other schemes) — and very nearly fulfilled the former goal (35+m killed of a target of 40+). In fact, one may even find that what a native of Eastern Europe would sooner find questionable is a deliberate aversion or inversion — the notion that Germans weren't inherently Nazis could be (and has been) taken as an attempt to shift the blame, whether onto non-German allies, or even (on the logic that Germans were themselves victims) the Nazis themselves. As if the basic trope wasn't bad enough.

Should be noted that Modern Germany is actually nothing like Nazi Germany however, as the country is basically now a prosperous social democratic country, filled with many ethnic minorities from across the world leaving the country not as homogenous as it once was, as well as a significant left wing voice in parliament. They are very conscious of the horrible past as the Nazis and are one of the few countries to outright ban holocaust denial. If Adolf Hitler was still alive he'd probably be horrified by it.

See also Nazi Nobleman for a trope caused partly by this one, or Godwin's Law, when someone is deemed a Nazi regardless of being German or not, or Music to Invade Poland To, when music that is from or is influenced by Germany is accused of being Nazist, as well as Argentina Is Nazi-Land, for another once-fascist country to Never Live It Down.

While real life Munich is very much against the actions of Nazi Germany, the Munich of Family Guy (or at least this Tour Guide) is in deep denial of their past actions.

While real life Munich is very much against the actions of Nazi Germany, the Munich of Family Guy (or at least this Tour Guide) is in deep denial of their past actions.