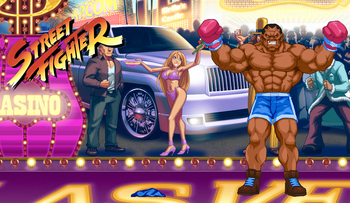 The Crazy Buffalo just clobbered another opponent, but you're not really paying attention to that fact, are you?
"With a figure like that, you don't need a name!"
— These Are the Damned
Advertisement:

Sometimes Fanservice is provided not by a major or supporting character, but instead by a very minor character who doesn’t even appear in the story until almost the very moment of fanservice. She will be on screen for anywhere from a few seconds to no more than a minute or two. (For a long time Fanservice Extras were almost Always Female. While male examples have appeared more often in recent years, female examples still far outnumber them.) The character exists solely to give the movie, show, or comic book a little extra titillation.

Fanservice Extras are rarely characters with actual names. If she receives billing in the credits (many don’t get any billing at all), it will be far down in the end credits, and her character's "name" will usually be an Exactly What It Says on the Tin kind of description like “Showering Blonde Cheerleader” or “Topless Girl in Car”.

Fanservice Extras are most commonly found in comedies, but also appear frequently in action movies and horror movies. A Fanservice Extra in a Slasher Movie often falls victim to Death by Sex, with a risk of Fan Disservice depending on the level of gore. While this trope exists mostly in "moving" media, Fanservice Extras do appear in manga and comics also. They will usually appear in only one panel and will be drawn to a level of detail not normally seen in the rest of the panel. They can add a "Just Here for Godzilla" aspect to an otherwise forgettable B-Movie, boosting sales and rentals and making the movie Poor Man's Porn or Best Known for the Fanservice.

The performers who play Fanservice Extras frequently have a background more in modeling than in acting. To illustrate, note how many of the films listed below, particularly from the 1980s and 1990s, use women who have appeared in either Playboy or Penthouse for these roles. The job usually pays a little more for the nudity or near-nudity required and requires almost no line memorization or acting. Not every person who plays one of these roles is Waiting for a Break; often they are simply models who have decided that they are young and need the money. As the years pass, some performers will view their role(s) as their Glory Days of back when they had a memorable role in a big movie, while others will consider the job an Old Shame that they don't want to admit to their grandchildren.

This trope is Ms. Fanservice or Mr. Fanservice (depending on the character's gender) without the necessary screen time or character development.

Compare Lady Not-Appearing-in-This-Game, which is when a fanservice character gets no screen time.