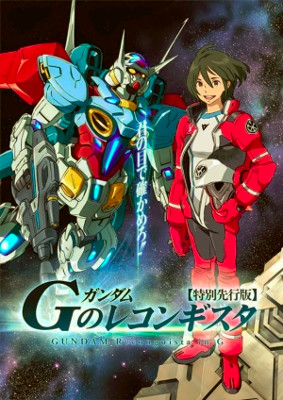 See with your own eyes.
Advertisement:

Gundam: Reconguista in G is the first series in the Gundam franchise by Yoshiyuki Tomino since ∀ Gundam and meant to celebrate Gundam's 35th anniversary.

It is Regild Century 1014, more than a millennium since the Universal Century ended. Bellri Zenam is a cadet of the Capital Guards, charged with protecting the Space Elevator called the Capital Tower, mankind's most important link with space and source of the priceless photon batteries. Suddenly, the Tower is attacked by space pirates and Bellri encounters an unknown mobile suit called the G-Self, piloted by one of the space pirates, Aida Rayhunton. Somehow, Bellri is able to operate the G-Self, which is supposed to be operated only by a select few. Bellri ends up joining the space pirates to fight the emergent Capital Army and an unknown threat from space. Through his adventures he will learn about the mysteries shrouded in the Regild Century, including his own history.

The series can be watched on YouTube on the official Gundam page, if you live in certain territories. Not officially available in Europe, unfortunately.

During a 40th Anniversary livestream for the entire franchise, 5 compilation movies for G-Reco were revealed to be in production. The first film, Go! Core Fighter, premiered on November 29, 2019, covering events up to episode 5 of the TV series. The second film, Bellri, Advance! released on February 21, 2020. The third, Legacy from Space premiered on July 22, 2021. The fourth and fifth film, Shouting Love Into a Fierce Fight and Crossing the Line Between Life and Death respectively, were both released in 2022, with the fourth film premiered on July 22, followed by the fifth and final film on August 5.