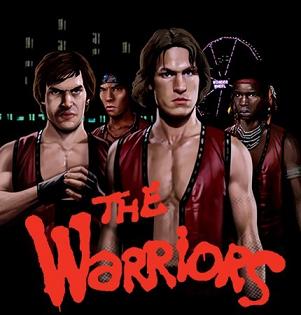 The Warriors is a video game based on the Cult Classic movie of the same title, developed by Rockstar Games and released in 2005. The storyline acts as both a prequel and a recreation of the film. Apart from a few platforming challenges, it controls like an arcade Beat 'em Up, and it is one of few successful examples of the genre in 3D.

In the year 1979, the Coney Island Warriors street gang is in the middle of some tough times, a fact which isn't helped by them feuding with the Destroyers, a larger and more established gang that also claims the territory around Coney Island. The first act of the game revolves around the Warriors' founder, Cleon, and his struggle to maintain their slice of Coney Island. The second act focuses on the gang's efforts to make a name for themselves in New York City. The third act drops players in the middle of Manhattan during the events of the film itself.

The Warriors contains the following tropes: