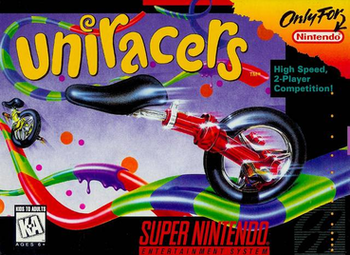 Uniracers (known as Unirally in Europe) is a 1994 SNES racing game developed by DMA Design (now a part of Take-Two Interactive) and published by Nintendo.

Uniracers features riderless unicycles with personalities racing against each other and performing tricks on a two-dimensional plane, which provides some platform gaming features, such as jumping over pits.